The Homestead Act of 1862 changed the world with its offer of free land. Millions of people immigrated to America seeking their fortune. Thousands came from Norway to the empty prairies of the Dakota Territory. The novels in this series follow two families who both suffer and prosper, portraying life as immigrant homesteaders with sensitivity and honesty.

FREE SHIPPING on all prepaid orders! When you purchase the Homesteaders Series novel set, you can add any other books at the same time and qualify for free shipping on the entire order (in the domestic U.S. only). 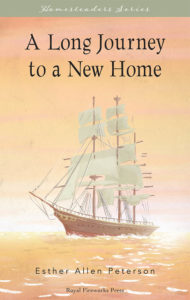 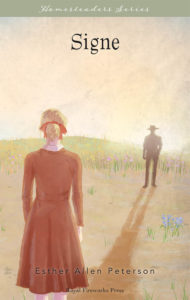 The Homestead Act of 1862 changed the world with its offer of free land. Millions of people immigrated to America seeking their fortune. Thousands came from Norway to the empty prairies of the Dakota Territory.

Author Esther Allen Peterson‘s Homesteaders stories are not true, but they are real. The things that happen to the Ytterhorn and Olsen families in the stories happened in everyday life to most homesteaders in the 1860s and ’70s.

Esther first became interested in the lives of the original homesteaders when her minister husband, Donald, served four churches in Fairdale, North Dakota, thirty miles from Canada. She says:

“The people were wonderful. They still had that pioneering spirit—that is, they felt a responsibility to look out for and help one another. The older members of our congregations were born in those sod houses, and their parents built those square white farmhouses that sat on almost every 160-acre parcel. When we arrived, those big old two-story houses were being torn down, and the grandchildren of those pioneers were building modern houses.”

The buildings may be gone, but the stories of the people who lived in them are very much still with us through Esther’s books.

“Reading the Homesteaders series is an opportunity to experience the struggles of pioneer life, with the family and community a focal point for strength and growth.” – Marilyn Broding, MLS (librarian), Battle Lake, MN

“The Homesteaders series provides an adventure to readers of all ages. The books are easy to read and have high interest as the reader learns about the hardships and adventures of our immigrant ancestors. A must-read for readers of all ages.” – Kirsten Olson, elementary teacher, Brainerd, MN

“The Homesteaders series presents quickly readable tales to help young readers understand the intense struggles faced by new settlers just after the Civil War as the railroad moved west. The historic insights are combined with worthy illustrations of how cherished friendships yielded solutions to severe struggles without bitterness and failure. Proven faith-based solutions are described in appealing ways to help young readers in their personal struggles with varying kinds of adversity.” – J.S.C., Muscatine, IA

“Many of my students hear the voices of their parents and grandparents in the Homesteaders series. However, the message of hope in these books and the resiliency of the human spirit appeal to all students. With authenticity, Peterson pulls us back to our roots.” – Toni Gredensky, Wahpeton High School, Wahpeton, ND