Home / Bookstore / Night of the Paranormal Patterns, Part Seven: The Veil of Phrygia Night of the Paranormal Patterns, Part Seven: The Veil of Phrygia

Lennie and Gil finally find the location of the Veil of Phrygia at a barn, but inside is an alien spaceship! The Cheshire Bat is already there, and he wants Lennie’s help in calculations that will enable the aliens to return to their mother ship. Lennie agrees, anxious to search for the veil. But what happens next is a surprise, and Lennie discovers that her role as Pattern Finder is only just beginning.

This book is Part Seven of the Night of the Paranormal Patterns Dyslexia Pack. It tells the final part of the story of Lennie Miller and her adventures with the creatures from the Mystical Realm. It is not meant as a standalone book. The seven parts are meant to be read in chronological order to be able to enjoy the complete story.

Lennie’s father finds a map among his old family records, and Lennie immediately recognizes it as matching the one that she and Gil used to find the first clue to locating the Veil of Phrygia. Lennie is anxious to return the veil to the Cheshire Bat in exchange for the Mystical Realm leaving her alone as their Pattern Finder. She contacts Gil, and they use the same strategy that they used before to pinpoint a new spot on the map. Lennie and Gil hurry to the new location, where they find a round barn. To their surprise, hidden inside it is an alien spaceship!

The Cheshire Bat is already there, but not because of the veil; he wants Lennie’s help in calculating how much weight the aliens can carry and how much fuel they will need to carry it and still be able to get back to their mother ship. Once more, Lennie and Gil work out the problem, this time so that the aliens can be on their way. They are doubly motivated by the idea that the Veil of Phrygia lies somewhere in the barn, so the sooner the aliens leave, the sooner they can search for it. But what happens once they provide the aliens with the answer is a surprise, and Lennie discovers that her role as Pattern Finder is only just beginning. 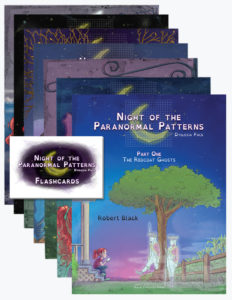