Twelve-year-old Kenny spends his days on the Chariton River in 1940s rural Missouri with his older brother Jim and their friends. When a new boy moves into the area, Jim’s behavior becomes threatening, forcing Kenny to choose between loyalty to his brother and doing what’s right. This is an achingly beautiful novel about a boy who must decide who he is—as a brother, as a friend, and as a human being.

Twelve-year-old Kenny spends his days on the Chariton River in 1940s rural Missouri with his older brother Jim and their two best friends, swimming, fishing, and roaming the countryside. Kenny’s love of the resplendent beauty of the river bottomlands is almost as boundless as his love for Jim, but his fidelity to his older brother has begun, at times, to feel misguided.

When a new boy, Henry, moves into the area, Jim takes a disliking to him almost immediately. Not only is he poor and living in an abusive home, but Henry, in his calm, understated way, is better at nearly everything, and it is obvious to everyone that he has more honor and integrity than Jim. Kenny likes Henry, and Jim’s unfair and increasingly vicious behavior toward the boy places Kenny in a position in which he feels he must choose between loyalty to his brother and a defense of what he knows to be right.

Set against the backdrop of World War II, Kenny’s inner turmoil is a reflection of the events playing out across the ocean. The decision that Kenny must make is agonizing, its consequences unthinkable no matter which path he chooses. This achingly beautiful novel is a poignant story told in the authentic voice of a boy who is forced to face the truth of who he is—as a brother, as a friend, and as a human being.

Author Leslie J. Wyatt learned first-hand about the Chariton River bottoms from someone who grew up there. She says:

“Listening to his stories was like stepping into a bygone age. I began to wish I could capture them for my children and all the other children in the world who would never get to live that life.”

“Playing out against the small foreground of local events is a big story on the world stage: over in Europe, another dominating individual is bending all of Europe to his sway. Kenny comes to realize that trivial-seeming decisions can have big consequences, and a tyrant is a tyrant, no matter how petty. Readers will appreciate the authentic feel of the times and the interplay between characters.” – Redeemedreader.com 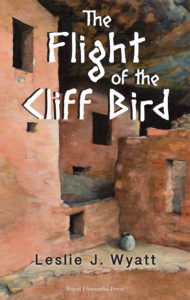 The Flight of the Cliff Bird