Home / Bookstore / The Weaver’s Scar: For Our Rwanda

The Weaver’s Scar: For Our Rwanda

Faustin is a Rwandan schoolboy forced to witness the 1994 genocide of the Tutsis by the Hutus. With his family slain, Faustin’s only chance of survival lies in his running and his sheer courage to outwit the enemy. He does not have to do it alone, however; he discovers the value and courage of an unlikely friend. This is a story that is at once horrific, gripping, informative, heartbreaking, and inspiring.

The Weaver’s Scar is a profoundly moving, gripping, horrifyingly beautiful story of one boy’s escape from the atrocities of the Rwandan genocide. It is the first young adult novel written in English for an American audience dealing directly with the 1994 genocide of the Tutsis by the Hutus, an event that resulted in the slaughter of nearly a million people. The novel is stunning in its eloquence, heartrending in its poignancy, and exquisite in its revelations, both of the characters’ personal lives and of the history of a nation torn apart by ethnic divisions.

Faustin is a normal schoolboy who excels at running and soccer. But dark secrets of the past hang over his family, and his father disapproves of his friends and his soccer games. Things only start to make sense when the teachers at school begin to emphasize the division between the Tutsis and the Hutus—a division that even makes its way to the soccer field.

As the terrible events of the genocide unfold, Faustin experiences first-hand the horror of neighbor against neighbor. With his family slain, his only chance of survival lies in his running and his sheer courage to outwit the enemy. He does not have to do it alone, however; he discovers the value and courage of an unlikely friend. Their journey to safety unfolds in a compelling narrative that ends with both heartbreak and, later, inspiration.

“At its core, The Weaver’s Scar is not about the Rwandan genocide per se; rather, the events of 1994 serve as a backdrop to a strained relationship between two friends whose families forbid their friendship. It is about a boy who does not understand his own father and whose misunderstanding causes him to hurt his father’s feelings beyond repair. It is about a father who dreams of bigger things for his son. And it is about how the scars of our past wound our present.”

Because the story unfolds during the genocide, there are several chilling and horrific scenes that younger and more sensitive readers may find challenging. The lessons it imparts, however, not just about history but about personal relationships, integrity, fidelity, compassion, and humanity, make it essential reading.

“In The Weaver’s Scar, readers will share in Faustin’s grief, anguish, and fear in this heart-breaking and well-written introduction to an area of the world rarely covered in middle school literature.” – VOYA Magazine

“The Weaver’s Scar is captivating, with a simple writing style that pulls readers in until the end. A powerful story of bravery, trust, and compassion, this book…gives an impactful and emotionally stirring experience of the tragic Rwandan genocide. The Weaver’s Scar offers readers a deeper understanding of humanity’s global connection and shared history, while providing strong support for a more peaceful, unified future.” – Skipping Stones Award

“The Weaver’s Scar [offers] a perfect balance of social and historical context on one hand and a tale of two unlikely friends trying to escape a wave of violence they barely understand on the other. …I think we sell young readers short when we assume they will not want to read this kind of book…. The Rwandan genocide belied the post-Holocaust statement of ‘never again,’ and keeping our young people ignorant is going to mean that more ‘never agains’ happen again.” – Lyn Miller-Lachmann, author, from The Pirate Tree: Social Justice and Children’s Literature

“Crawford paints a vivid picture of both the horrifying events that Faustin survives and his fortuitous rescue and later immigration to America…. The dramatic first-person narrative allows readers to experience the story through Faustin’s eyes, encouraging empathy and understanding.” – School Library Journal

“It can be difficult to find a book that deals with tough real-world issues in a way that’s sensitive to the developmental needs of middle school students. The Weaver’s Scar fills this need nicely and is a fantastic addition to any social studies or English curriculum. Solidly rooted in history, this earnest tale of survival and growth will resonate with teachers and students alike. After studying the history of Rwanda and colonialism as a class, reading this novel brought the abstract dates on a page to life with relatable characters and developmentally appropriate themes.” – Matt Stenovec, middle school humanities teacher and faculty team leader, Soundview School, Lynnwood, WA

“The weaver is the persistent little bird that surmounts every reversal of fortune as it tries to create a nest to procreate, always returning to square one, no matter how many obstacles it faces. Faustin received a scar in a soccer match with the Hutu boy who later befriended him. Faustin’s father had a scar on his ankle from the 1959 revolution that crippled him. Like the weaver bird, father and son continued to press their love of life despite their injuries. Crawford’s lesson is that this little bird is a metaphor for how Rwanda should overcome its past and prosecute its future. [This book] is a good introduction to Rwanda and its troubled past by an author and teacher who knows the situation well. It is an excellent read.” – Professor Augustine Brannigan, University of Calgary, author of Beyond the Banality of Evil

“This wonderful young adult novel is a great and lasting accomplishment. The story is suspenseful, the characters vivid, and it teaches a lot of things, not just about Rwanda but also about friendship, life, kindness. Over the years, I have read this and that about the Rwandan genocide, book chapters, articles in magazines and newspapers, but the story of the friendship of Deo and Faustin is to me one of the most memorable…. The tone is serious but not preachy; it is accessible but by no means unsophisticated; it shows reality, but because its characters are fully fleshed-out, contradictory human beings, even the most gruesome events become comprehensible to the degree that the characters themselves can understand and process them…. It is a great read.”  – Dr. Martin Kagel, A.G. Steer Professor and Head of the Department of Germanic and Slavic Studies, University of Georgia

“From the first page I was fascinated by this harrowing tale of survival and friendship. Bringing to life the disturbing news of genocide in Rwanda, Crawford puts a human face on the people who lived through these terrible events. The tale of Faustin is gripping, captivating, and ultimately timeless. It is a story ripe for discussion on both a human and a literary level.”  – Debbie Pearson, librarian, Seattle Country Day School

“It’s hard to imagine a more compelling story. Faustin and Deo are forced into horrifying situations, but their journey, and the choices they make along the way, are true to the characters as well as the devastating history of the conflict. The Weaver’s Scar should be in every school library. It will be an excellent addition to English and history curricula.”  – Sam Harris, M.Ed., MLIS, middle school librarian, Charles Wright Academy 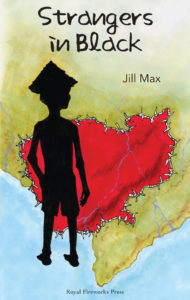