Benoit Mandelbrot had a talent for envisioning geometric solutions to mathematical problems, and that and his ability to find connections among seemingly unrelated subjects led him to the discovery of fractal geometry. Others took what he did and applied it to new areas, and his work was the foundation for the development of smartphone antennas, movie animation magic, and much more.

Most people have never heard of Benoit Mandelbrot, but it’s hard to imagine anyone who hasn’t seen the effects of his work. In fact, the movie and gaming industries and even smartphones would be very different today if not for Mandelbrot, a Polish Jew who escaped Nazism to become one of the most important mathematicians of the twentieth century.

Mandelbrot had a talent for envisioning geometric solutions to mathematical problems, but for the first part of his career, he seemed to his colleagues to be disorganized and unfocused. However, although Mandelbrot had been investigating topics in an array of different fields, he had begun seeing the same geometric functions and characteristics in all of them, from coastlines to financial trends to telephone signals to galaxies. His ability to find connections among such seemingly unrelated subjects led him to the discovery of fractal geometry. His work at IBM with the first computers enabled him to explore and expand upon his ideas, opening up an amazing new mathematical realm. Others took what he did and applied it to new areas, such as economics, telecommunications, medicine, biology, and even art, and his work was the foundation for the development of smartphone antennas, movie animation magic, and much more.

We have always lived in a fractal world, but Mandelbrot is the one who showed it to us.

This book includes a variety of color images that illustrate fractal figures and patterns to enhance the explanations and for greater visual enjoyment of the narrative. There’s also a “Doing the Math” section at the end of the book so that readers can try working out the math themselves!

“The book tells a fascinating story, and shows us some of the connections Mandelbrot does make, and overall, Benoit Mandelbrot: Reshaping the World is a very satisfying read.” – Sprinkles’ Reviews, Book Bunnies Blog (click here to read the full review) 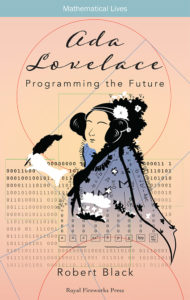