Book 3 of the Poodle Series

This is the poetics book in the Preliminary Level of the MCT language arts curriculum.

Poodle Knows Poetry is the third book in the Poodle series. Children who befriended Poodle the chicken and his friends What? and Sidney in the first two books will be delighted to discover them again as Poodle explains the fundamentals of poetic devices to his surprised (and ornery!) author.

Poodle begins the story alone after having left the Blue Mountain. Eventually the author is talked into writing his best friend What? the beagle into the book, and ultimately they are joined by Sidney, the world’s fastest snail, but not before a few new characters join the cast and Poodle teaches us some of the most important techniques used in writing poetry. The brilliance of the book, however, is that Michael has written these poetic devices into nearly every line so that prose and poetry become almost indistinguishable.

Throughout the story, we both learn about and see in action the importance of sound and meter, including various kinds of rhyme, assonance, consonance, alliteration, iambic tetrameter and trimeter, and ballad stanzas. Poodle professes to be a poet, and although he successfully puts his money where his beak is, the author is a pretty sneaky player as well, filling the story with the very poetic techniques that he claims never to have heard of (you can’t trust authors).

Again in this book the fourth wall is broken as the author and Poodle discuss and debate both poetic devices and the plot of the story, and again Maybe the mouse breaks into the scene occasionally to remind everyone that this is not just a story; it’s a play, and they’d best get their parts right. The book operates at several different levels, all as the drama unfolds around both a lurking monster and an ominous storm brewing in the distance.

Michael sprinkles the story liberally with literary references, from Shakespeare’s Romeo and Juliet and Hamlet to Thoreau’s Walden, to Melville, Cervantes, Homer, Robert Burns, Percy Bysshe Shelley, and Wallace Stevens. The characters actually meet Long John Silver aboard his pirate ship and Alice and the white rabbit in Wonderland as the author (a devious sort of fellow) yanks them from one scene to another. There are even references to Bob Marley, Bobby Day, and Lawrence of Arabia! (Perhaps the author is mad?)

Poodle Knows Poetry is gorgeously illustrated by artist Christopher Tice (it is arguably some of Chris’s best work yet) and features QR codes that link to audio of Michael narrating the story, which is a bonus that no one, no matter of what age, will want to miss. Between Michael and Chris, the book is practically a living entity, brought to life with color and sound in ways that are rarely achieved in a printed work. And don’t forget that children will actually learn from it (it’s easy to forget that, we know)! 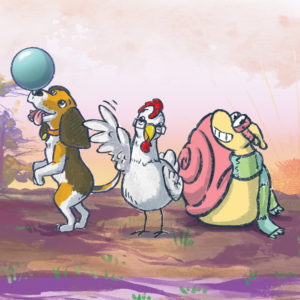