This is a full-color edition of the vocabulary book in Level 3 of the MCT language arts curriculum.

Note: There is a set of flashcards available to help students study the stems and words in this book. (See below.)

This book follows the same formula as Caesar’s English I, Classical Education Edition; it offers twenty lessons that alternate between introducing five Latin stems that are the basis for many of our academic words and five classic words that have been identified by Michael as being prominently used among the great writers of English and American literature. The book is loaded with vocabulary activities that allow students to manipulate and play with the stems and words, as well as grammar analyses, nonfiction writing samples, poetry to help students feel the Roman experience, writing exercises, math problems using Roman numerals, word searches, and much more. There is a substantial emphasis on the geography of the Roman world.

There are additional essays on the Iberian Peninsula by Myriam Borges Thompson and on Roman history by Thomas Milton Kemnitz, who also took the photographs reproduced in both volumes.

The Classical Education Edition of Caesar’s English II is filled with so many extra elements that the book is too large to be handled easily by children. As a result, the student book comes in two parts.

As an added bonus, the book contains QR codes that link to audio of Michael reading his poems and his sesquepedalian stories, as well as discussing the grammar of the vocabulary so that children can hear the words in context and will know how they are pronounced. Myriam Borges Thompson also provides audio for the book, reading her Spanish translations of Michael’s poems and adding interesting commentary to her essays about the Iberian influence on the Roman world, which has subsequently influenced our own.

This is a beautiful edition of Caesar’s English II, with the photographs in full color and printed on special, high-quality paper. (See below.)

There is also a black-and-white edition available. In addition, there is a set of flashcards available to help students study the stems and words in the book. (See below.) 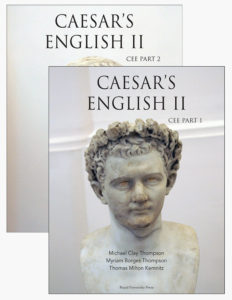 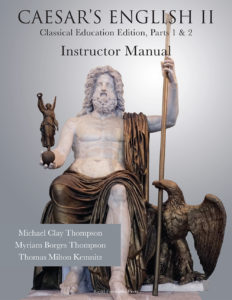 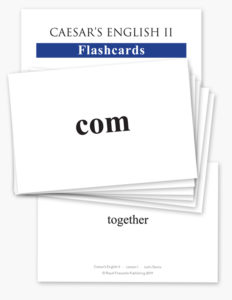 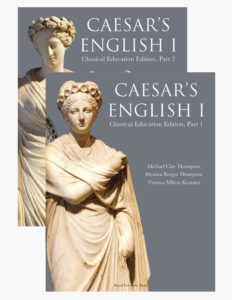 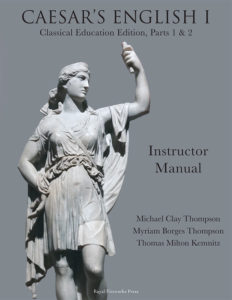 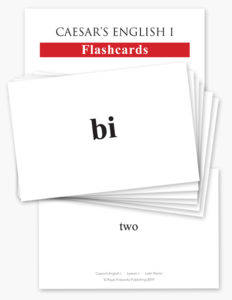 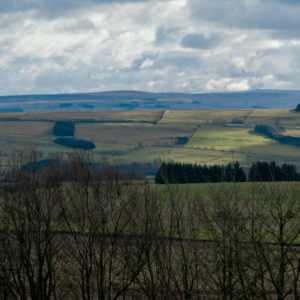 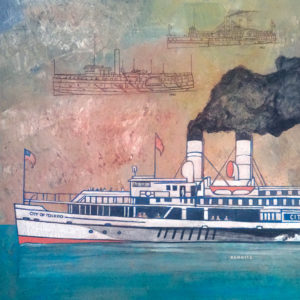