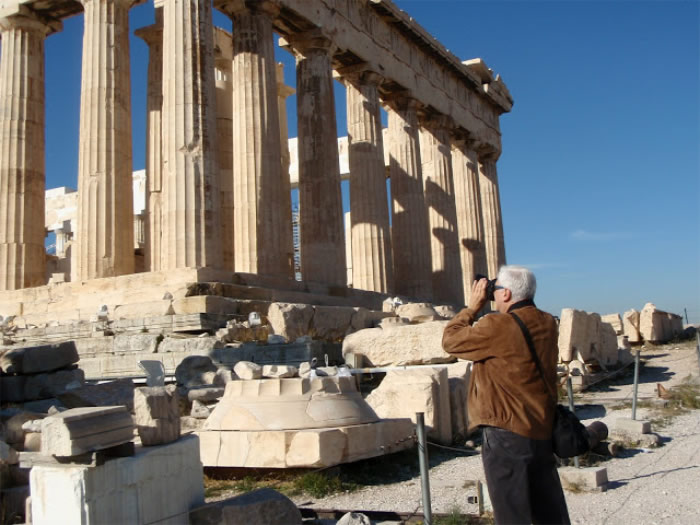 The Genesis of the Classical Education Editions of Caesar’s English 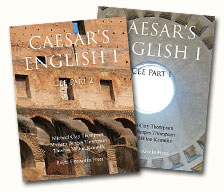 By mid-2011, Michael Clay Thompson and I had been discussing our desire for a new edition of Caesar’s English for two years, improving its graphics and its intellectual heft.

A new Caesar’s English had to be built on a sharper and broader base of images than those available to Michael when he first wrote the book. So I upgraded the Royal Fireworks camera equipment and in early September of 2011 went to London, where I spent a day photographing the Greek and Roman antiquities in the British Museum. It was there—photographing the Elgin Marbles in that fabulous room devoted solely to the Parthenon—that I saw clearly how to retool the entire vocabulary strand, from Building Language through The Word Within the Word III. That led to an excited call to Michael, and within minutes Michael too saw the possibilities, was similarly inspired, and began to elaborate on the plan. I came away from the British Museum with 1,250 photographs, wishing that I’d had more time to spend there. I also stretched my trip to include a visit to Fishbourne, a Roman villa found in Sussex in the 1960s, in the hope that there I would find floor mosaics that would be useful.

Late in September I went to Rome, Herculaneum, Pompeii, and Naples, where the National Archaeological Museum is a treasure. In seven days I took 6,100 photographs, walking 70 miles in the process. I photographed everything from Roman roof tiles to building foundations, from wall paintings to wall construction, from the Colosseum to the drain pipes in Herculaneum, from marble columns to brick floors, and from brick columns to marble floors.

I was fascinated by the Roman use of brick and mortar, by the efficient and cost-effective Roman building techniques, by their road construction and the durability of those roads, particularly because so many of the roads leading to Royal Fireworks Press in New York had just been washed away by Hurricane Irene. There were clever touches like the Roman arrangement for dealing with horses so that their streets were not impeded by hitching posts. I was enthralled by the mosaics and the wall paintings, by the decorative flourishes on common household items, and by the elegance and economy of interior courtyards. I gave Michael all of the images, and he was inspired to begin thinking about the new Caesar’s English I. We immediately selected an image that would be the new cover for the book. Insofar as you can judge a book by its cover, this truly was going to be a new edition of Caesar’s English. The image we chose shows the oculus of the Pantheon. An oculus (Latin for eye) was what the Romans called the opening in the roof they used to light large spaces during the day. The Pantheon in Rome was originally built to honor all of the Roman gods; it was converted to a Christian church in the seventh century. It stands today as the most complete and intact Roman building that most people will ever see. The Romans cleverly reduced the weight of the ceiling by insetting the concrete in steps to give an interesting design, as well as to reduce the load on the structure. Repeatedly in Roman structures still intact—including arches—one sees the same coffered ceiling used to reduce the load.

There was so much about this enterprise that was enjoyable. I photographed busts of Plato and Socrates, Augustus and Trajan, and so many other Greeks and Romans whose countenances might or might not be accurately portrayed. It was exciting to see people whom I have known all my adult life without ever being able to put a face with the names. It was engaging to look at many of the details of Roman life. Roman roofs were tiled, and the Romans had a simple system. They made a tile that was broad and flat, except that it had raised sides. The two sides were then covered by a semi-circular tile. That was all they needed to tile a roof—two different tiles. They could hold them in place with mortar, and the result would last for thousands of years, through volcanic eruptions, earthquakes, and world wars. And because the large tile was rigid and broad, the sub-roof was remarkably easy to build, light, and inexpensive. It just took a few well-placed rafters. The two tiles also served effectively at the bottom of the structure as part of a drainage system; turn the half pipe over, and it carried water to the broad tile, which served to direct the flow away from the building.

Often I found myself engaged in details that had escaped my notice in earlier trips. Previously I had paid attention to the orders of the columns that are a ubiquitous feature of the Roman cityscape: Doric, Ionian, Corinthian, Tuscan, and composite. On this trip I found myself examining the columns themselves and understanding more of what the Romans were doing. While the arch provided support for the massive architecture of the Roman world, the column allowed more air and light and still held the roof aloft. The Romans did many things with the column, sometimes even decorating them with mosaic tiles. In December of 2011, just a few months after I had returned from my previous trips, I went abroad again, this time to Athens and Delphi, where I took another 6,000 photos. I was in Greece for four full days plus the afternoon of the day I landed. The entire trip was terrific. It had been many years since I had been on the Acropolis and had looked at some of the most exquisite buildings ever built; even as ruins they are awesome. The Erechtheion with its Porch of the Caryatids is as glorious as the Parthenon, if not as massive.

I revere ancient Greek culture. I used to read The Iliad every year; each reading enthralled me. Our political debt to the Athenians and the birth of democracy is beyond measure. Two of the most important early figures of the political world are Themistocles and Pericles. The former was the man who formulated the strategy to develop Athens into a great naval power, and it was the demands of the navy for men to pull the oars that entrenched democracy in Athens. It is impossible to imagine men rowing for many hours each day and then being content with no say in their government. A navy based on oarsmen is very different from an army divided between aristocratic cavalry and plebian foot soldiers. A brilliant strategic thinker, Themistocles seems to have been the first man to figure out how to exploit democratic procedures for his political ends, as well as to have been primarily responsible for the strategy and tactics in the Greek defeat of the invading Persians, and particularly the annihilation of the Persian fleet. Pericles is the preeminent exemplar of a wise leader. One of the thrills was to come upon an exhibit of the ballots, called ostracon. These the Greek citizens cast in 482 B.C.E. to have Themistocles ostracized—banished for a decade; in Themistocles’s case, it meant for the rest of his life. The democracy of Athens was often rough, and there were ostracon for Pericles in 444 and 443 B.C.E. The museum containing ostracon was on the north side of the Acropolis in a stoa now rebuilt along the ancient agora; on the south side of the Acropolis one stumbles upon the Theater of Dionysus, where works of the ancient Greek playwrights Aeschylus, Aristophanes, Euripides, and Sophocles premiered. Imagine standing where Sophocles stood! Of course, any of the greats of ancient Greece and Rome might have walked where I stood—Socrates, Plato, Pericles, and later Alexander the Great, Julius Caesar, Augustus, Cicero, Hadrian, and so many more who came in the spirit of reverence that had taken me there. One cannot help but be awed by the burst of creativity that democracy wrought—such a flowering during the course of fewer than two centuries in sculpture, architecture, vase painting, theater, poetry, philosophy…indeed, in virtually every human endeavor. Centuries later the Romans could do no better than copy what the Greeks had done 500 or 600 years earlier. Much of that Greek culture remains the finest that humankind has ever produced. Of course I had to go to Delphi, where almost every ancient who had the means went at one time or another in his life. The only building even close to intact is the Athenian treasury, but there is the amphitheater, and for those who climb all the way up, the stadium. As awe-inspiring as it all was, there was also a single plate in the Delphi museum depicting a girl with a lyre feeding a bird. It was exquisite; that plate alone was worth the entire journey. Here and there in every museum were exhibits that particularly thrilled me. There was a display of the spear points and arrowheads from Thermopylae Pass, where the 300 died holding their ground to save Greek civilization from the Persian invaders. There was a bust here of Plato, there of Sophocles, another of Augustus, the face of Thucydides, the head of Hadrian, a bowl depicting wrestlers, a statue of Athena, a major bronze of Zeus, the death mask of Agamemnon, a dish showing an athlete holding jumping weights, several displays of different sets of those weights, and beautifully conceived coins and pots and vases and bronze helmets.

Coming back from Athens (an incredibly long flight), I had ample time to reflect not only on the glories of ancient Greece but also on Royal Fireworks Press. When I started publishing for gifted children, I was so excited by what I was doing that I regularly stayed up working all night every third or fourth night. There was so much to do that sleep was inconceivable. Since then, I have again found myself that energized from time to time, depending on what exciting new projects we have planned. There is a difference between good and great; we are determined to bring to you what is truly great, and we will use the best that humankind has created to fire the imaginations of children for years to come.